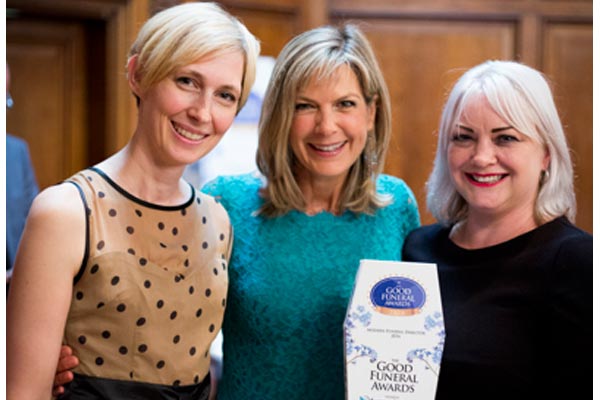 We know that a large number of families and people we work with nominated us for this award, but having seen the long list of amazing people in the category we still can’t quite believe we’ve won. We’re absolutely thrilled.

In giving us this award the judges said:

“Carrie and Fran are outstanding examples of a new wave of breath-of-fresh-air funeral business owners – what the Good Funeral Guide terms as ‘artisan’ funeral directors. Some call them alternative funeral directors. Typically they reject what they regard as the arcane traditions and mystique of funeral service, presenting themselves as people first, funeral directors second.”

We simply want to make sure that people are aware of their choices; that they know that their goodbyes can be personal and can reflect our individuality and the way we live our lives today – and they don’t have to cost the earth. Receiving this award is an amazing recognition that we are achieving what we set out to do.

We thank all the families who cared enough to nominate us, and all our friends and supporters who have inspired us do what we do.

A Natural Undertaking
5.0
Based on 25 reviews

Ray King
04:55 23 May 20
I cannot speak highly enough of A Natural Undertaking. Fran and her whole team provide a... very professional and efficient service with the care and compassion which is so important at a time of grief. In such a difficult time of the Covid pandemic, this especially more stressful experience was made easier by their very personal care.read more

Jamal Shabba
13:43 26 Mar 20
Truly a remarkable company to use for such a horrible time. Their knowledge of the... industry provides a lot of comfort and are very willing and happy to move to in keep with requests. Would recommend them to anyone that should ever have the misfortune of needing them. They genuinely turn a horrible situation into the event the deceased would want it to be.read more

Chris Hallmark
08:38 07 Mar 20
Carrie and Fran have built a business that feels genuinely different. They were warm,... friendly and very responsive. They wanted to help us create the funeral that was right for our family, and to remember Dad in our warm and slightly quirky way. They even indulged us with the custard jokes. I cannot recommend them more highly and wish them every success with their alternative take on remembrance.read more

Gillian Washington
18:06 29 Jan 20
A Natural Undertaking is an undertakers with a difference. No stuffy offices with men in... black suits. Just lovely helpful and caring people. Lots of choices were available and nothing was too much trouble. We did not feel pressurised or rushed into making decisions. Our whole experience was dealt with total empathy and efficiency. Would highly recommend them. Definitely 5 stars.read more

Amanda Smart
18:50 20 Jan 20
We were so thankful for all that Carrie, Zed and Fran did to help us through the period... following the devastation of Oliver's death. The sense that they really empathised with the pain of what we were going through and their way of guiding us, while encouraging us to do what was most helpful and most reflected Oliver's life was so empowering. You can't re-do a funeral! It was so important to us that it was 'right' and they made that easier at a time when we were struggling to think clearly. The service they provided was so personal and sensitive. Thank you!read more

James MacLaren
16:04 11 Dec 19
Carrie, Fran and everyone at A Natural Undertaking were fantastic in arranging my Mum's... funeral. Carrie was keen right from the start to make sure that everything was just so, despite the fact that we were working on a budget. Everything was clear and well explained (in fact, from beginning to end, communication was exemplary). Fran was fantastic in putting together the order or service as well. They communicated with all of the relevant parties, such that everything came together seamlessly. I hope that I never need to, but if I need to arrange a funeral again, I won't hesitate to give them a call.read more

Elizabeth Logan
06:40 12 Nov 19
I can't speak highly enough of Carrie, Fran and the entire Natural Undertaking team. ... Their compassion and professionalism were outstanding. The funeral and the celebration of life for my Father-in-Law were just what he and the family wanted, we couldn't have asked for better. The Natural Undertaking team were there for us from the start, from their calm reception area to their suggestions for flowers, locations and support with all those little details - they just smoothed the way. I would recommend them in a heartbeat.read more

Rachel Gregory
06:45 12 Oct 19
Absolutely wonderful company. Understood our family’s wishes completely. Ethical and... their pricing is incredibly fair. Thank you so much for making a difficult time much easier for us.read more

Rachel Plant
11:40 08 Oct 19
From start to finish Carrie, Fran and zed were the most wonderful undertakers we could... have asked for. They were so much more than just funeral directors, they were supportive, respectful and inspiring. Our family had an idea of what we wanted for Holly's funeral and everyone at A Natural Undertaking helped guide us with her wishes. Holly wanted a natural burial and it was in her quirky nature to have a creative and diverse farewell which is exactly what she got. Death and grief is extremely hard especially when a loved one is so young. We felt like we had an opportunity to help others through this process as a result of everything they had to offer us. Our family, our children & friends were all involved (as per our wishes) thanks to the huge effort and organisation of these wonderful people at A Natural Burial. Thank you so much for everything you did for Holly and family. We will hold you in our hearts forever xread more

Lisa Small
09:19 02 Jul 19
From our first meeting with Fran to the day of our son's funeral, we were treated with... care, empathy, dignity and understanding. The whole team at A Natural Undertaking, Fran, Zed and Carrie, paid attention to the smallest of details in the planning of his funeral, carefully explaining everything to us in a way which was clear but sensitive. Their handling of the arrangements ensured that he had a beautiful and fitting send off. We could not have been given a better level of care, and we would highly recommend them to anyone who wants to give their loved one a unique, individually tailored farewell.read more

Linda Higgins
18:07 06 May 19
We would like to congratulate Fran and Cassie for looking after our dear friend... Joan. From the start to finish the care, kindness and attention to detail was second to non. We were given help and support with all the arrangements and we felt that the stress, of loosing a loved one so suddenly, had been taken off our shoulders. They helped to turn the day into a wonderful tribute to Joan. We would highly recommend this wonderful service!read more

Chris Lee
15:50 15 Apr 19
The service provided by a Natural Undertaking was perfect. Fran and Carrie advised and... guided us through both the process and the decisions that we needed to make for my father’s funeral with thought and understanding. They advised us what was possible and made constructive suggestions without pressure. They then calmly undertook the organisation of the service itself with calm efficiency despite late inputs from ourselves. The resulting service was both personal and appropriate to say goodbye to my father from myself, our family and his friends. I was specifically appreciated that Carrie found time to discuss in general the workings of the undertaking business which one at other times have little time or inclination to investigate. It certainly helped me during this time. I whole heartedly recommend this company.read more

Jane Arstall
17:19 14 Apr 19
Carrie and Fran are amazing! Nothing is too much trouble for them and they go the extra... mile to make sure that people get exactly the funeral they want. We had a big funeral at Cambridge Road Methodist Church and wanted to use a YouTube clip of my husband playing the Birmingham Town Hall organ which had been his special 60th birthday treat. Carrie managed to arrange an audio clip so that everyone heard Mark playing at his own funeral, which made the service really special. I know Mark would have loved the service. Thanks Carrie and Fran - I would recommend you to anyone.read more

Kamala Kay Mann
05:50 09 Apr 19
Carrie and Frances bought a heart centred approach to a very sad and difficult time with... the death of my brother. They organised the funeral in a week and it ran so seemlessly, so smoothly that the image I get when summing up how I feel about their services is a beautiful Swan gently gliding through water. Thier compassion, kindness and ability to listen, guide and respond softens my heart as I write this. Their attention to detail and having everything covered was such a massive weight off the family’s shoulders. We felt completely held. It seems strange to write this but they were a breath of fresh air to what is in essence is a very difficult time. Thank you so much Carrie and Frances - just like Swans gliding through water, you made a very difficult time seem like a heart centred natural undertaking. K Mannread more

Giles Darby
13:40 19 Feb 19
Professional, sensitive, efficient and compassionate from start to finish. Their... personal, alternative and fresh approach was exactly what we wanted yet without compromising all the finer arrangement details, which were dealt with perfectly. I can’t recommend them highly enough at what is always a difficult time.read more

Mike Abrams
17:59 30 Dec 18
A Natural Undertaking were recommended to us following the death of my wife, by a friend... who had used them previously. From our first meeting, we felt we were in good hands with a team that could talk us through the complexities of the arrangements and discuss the range of options available to us in a personal and very caring way. Working together we planned a service that included a number of unique elements that reflected the exceptional individual who sadly we were having to lay to rest. On the day, the arrangements worked perfectly and the feedback from friends and relatives who attended has been very positive. I am so glad we worked with A Natural Undertaking - we received a very personal and caring service and the whole team were a pleasure to deal with.read more

Simon Wilkes
15:16 20 Dec 18
As a family we decided to go forward with a direct cremation and hold our own service... outside a church environment. Even though this was with our fathers wishes it is sometimes easy to think you must follow the 'traditional' route. Fran & Carrie were both supportive in helping us ensure the day was the right mix of sadness and celebration. It was the little caring things which made the difference. So if you want the right service without feeling you are still in the 1950s then Natural Undertaking will provide a first class service whether its a simple option like ours or a full bespoke option.read more

Nerina Villa
11:02 20 Sep 18
Right from my first phone call Fran at A Natural Undertaking was amazing. She was kind,... warm and comforting at a time when that is exactly what you need. She gave me wonderful advice and made sure that we were able to create the most wonderful, individual funeral for my mum that still makes me smile when I think of it. They were there at every step of the way with support, advice and practical help. Thank you so much.read more
Next Reviews

Interested in joining us at a Death Cafe? Learn about our news and the events we’re involved with.
READ MORE

Share This
We use cookies to ensure that we give you the best experience on our website. If you continue to use this site we will assume that you are happy with it.OkPrivacy policy